From socialmirrors.org
Jump to: navigation, search 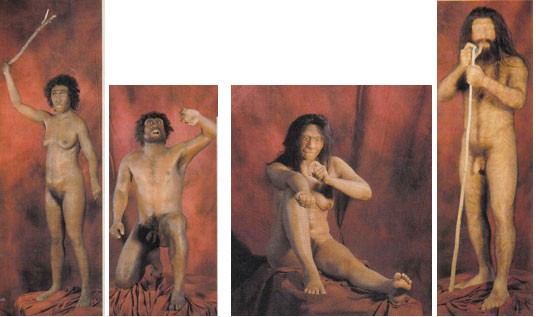 HUMAN EVOLUTION SELF-AWARENESS AND THE EVOLUTION OF THE HUMAN BRAIN

A central problem in the study of human evolution is that there is no agreed theory defining ‘modern human behaviour’. Apparently, no one knows what it is that has evolved in the human line – what makes us different from Neanderthals, or even, precisely, from chimpanzees. The problem is not, of course, one of simple ignor-ance, but of systematic collective deceptions (cognocentrism, logocentrism, genocentrism, and even Eurocentrism) which lead archaeologists to look for a single Rubicon in human evolution – usually the emergence of ‘symbolic behaviour’ – or maybe two – ‘symbolic ability’ followed by ‘symbolic behaviour’ (which of course reverses the usual biological sequence – behavioural change followed by genetic change). Currently the dominant hypothesis purporting to explain human brain expansion is the ‘Machiavllian’ or ‘social intelligence’ hypothesis. At least this is a social theory – it avoids the worst excesses of individualism – but it is still cognocentric (see the Social Brain A much better alternative is social mirror theory and its corollary – the ‘play and display’ hypothesis of human brain expansion – which predicts three Rubicons during human evolution:


1. A major expansion of song-and-dance display (coinciding with the first phase of brain expansion between 2.5 and 2.0 million years ago).

2. The emergence of modern pretend play (coinciding with the second phase of brain expansion – within the last 500,000 years).

3. The advent of ritually-based economico-moral culture (triggering the third phase of brain contraction within the last 100,000 years).