From socialmirrors.org
Jump to: navigation, search

The fluttering courtship displays of butterflies clearly do not demand much in the way of brain power, and their sometimes dramatic wing markings, which serve primarily to deter predators, do not require brain power at all. Even flowering and fruiting plants have such vegetative displays, coercing insects, birds, and animals to collaborate in pollination and seed dispersal.

Birds of paradise have vegetative displays (their plumage) but also stage spectacular song-and-dance-like performances. Some species perform in groups, creating a riot of song, colour, and balletic movement. Usually only male birds perform in this way, and the displays are used by females to select the fittest mates.

It has been suggested that human song and dance evolved to serve the same function. But then, why have other apes not evolved anything comparable? Howler monkeys howl and gelada baboons engage in synchronised choral song, but dance-like displays are absent even among monkeys. One likely reason is that primates do not have bird-sized brains - they have complex social lives and much more sophisticated means of determining sexual partners. So why humans, with even larger brains? And why, in humans, do both sexes sing and dance? Unlike birds of paradise, coordinated vocal and balletic displays begin in three-month-old human infants -well before sexual maturity- and mothers engage their babies in playful musical and gestural exchanges with narrative-like structure (Gratier & Trevarthen, 2008). In Papua New Guinea, men borrow the plumage from birds of paradise to enhance their appearance and add to the vibrancy of ceremonial displays. In Brazil, the Txicâo Indians (top right) use body paint to indicate which age-group they belong to. People everywhere alter the appearance of their bodies with clothes, adornments, coiffure, cosmetics, tattoos, cicatrization, and mutilation. We are the only species which alters its appearance for so many playful, social, and cultural reasons, and creates so many artificial media for display - from musical instruments to palettes, paints, brushes, wallpaper, and television sets.

Human mate choice may well be influenced by the singing or dancing talents of a potential partner, but in most human communities dance serves primarily ritual functions - to demonstrate prowess to rival groups, to contact the ancestors or gods, or to prevent the collapse of the universe. Humans also have a formidable range and variety of displays. Some of these are illustrated on the homepage_TOPand a provisional classification is given in the table of social displays below.

Above all, social displays enable us to share a unique range and variety of experiences, from feelings and emotions to thoughts, fantasies, abstract concepts, stories, and dreams.

Anything which makes it possible to share experience counts as 'social display'. For a more complete account see Whitehead 2001. 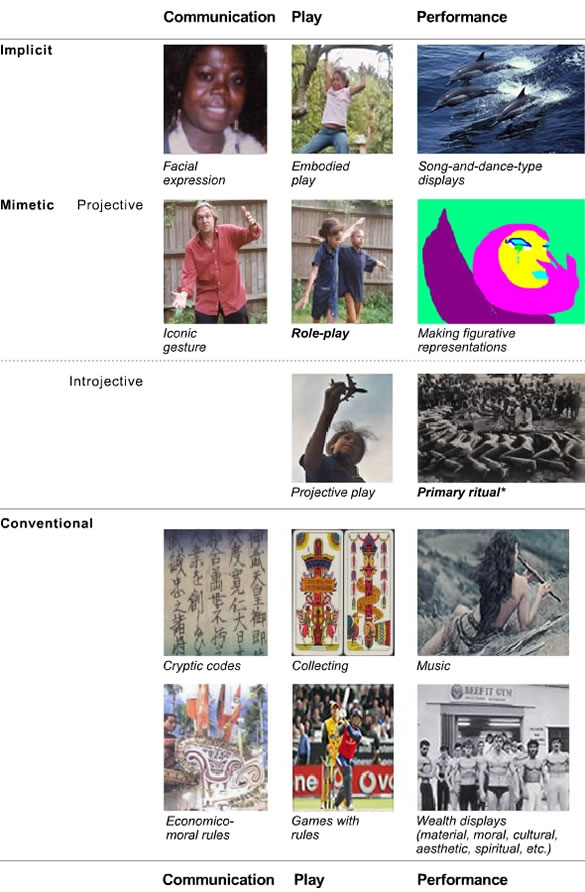 *Since the first ritual probably occurred over 100,000 years ago, the character of 'primary ritual' (i.e. the beginning of economico-moral/conventionalized culture) is hypothetical.

Whitehead, C. (2004) 'The social brain and the origins of human self-consciousness': invited talk given to the Radical Anthropology Group, University of East London, 23 November. Download PDF_TOP

In the following section of the article Social Display/Section2#TOP you can continue reading more in depth material and also edit an article and/or add your own article by following the instructions.